Fighting the Good Fight, in the arena and out.

Joe B. Marshall was inducted into the Mi’kmaq Sports Hall of a Fame in 2016 as a Builder. His drive and determination in providing activities for youth, and his ongoing commitment to the growth of the hockey and ball tournaments earned him the recognition of his peers, community neighbours, and Mi’kmaki.

Joe B. Marshall sat down for an interview in September 2017 and took the time to answer some questions about his history in sports as a Builder.

Do you remember coming up with the idea for the tournament?

Wally (Bernard) and I were talking about the need for something like that and so we organized a small tournament. The two teams were Membertou and Eskasoni. It was a juvenile tournament, so 18 and under.

How did it grow from there? 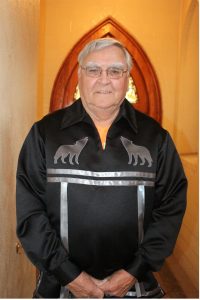 We sent an invitation out to other communities, to see if they wanted to bring teams. And the very next year we had Eskasoni, Membertou, Pictou Landing, and I forget now who else was involved, but it was a bigger tournament than the year before. We had it at the Centennial Arena. Each year the crowds kept getting bigger, and more reserves wanted to get involved.

At one point we even had a team from Sandy Lake, from Ontario. They chartered a bus and brought their team and some cars followed them. They won the championship. But we thought what the hell, a team from Ontario – this is going to make the newspapers.

It went that way for many years, until the committee in the municipal council didn’t favour us with booking the arena for our tournament, one year. It’s a good thing they told us early. Geeze, we’d be battling Sydney’s council, because one of the people who was fighting the council, was the guy who ran the canteen of the Arena. He was livid and went back after them again and again. He told him he was losing $5-6000 every year, just from the tournament. So we moved to North Sydney at the Northside Forum. They were accustomed to letting us book there because that’s where our men’s team played.The game moved again to Cox East, just outside of Sydney, and that was where it stayed until just this past year. Now there’s a brand new arena in Membertou.

During those years we expanded the tournament, to not just juvenile, but also a category called the skulk division, which was bantam level (14-15 years old), and one year of midget (15). Now it’s midget instead of skulk, bantam, and junior.

Every year we scrambled for money to pay for the ice and trophies. We would set up a gate at each game. We always raised enough money to pay for everything. And then, after Wally passed away, the Membertou band took it over. And it’s still going.

The tournaments was to give the kids on the reserves a chance to play hockey and form leagues. We had to at least give them a chance to play. We always hoped that some of them would make it into the bigtime.

One definitely made it to the bigtime, Everette Sanipass, from Big Cove. Sanipass played at the tournament since he was a little guy. Then he was playing in Major Junior hockey in the Quebec league. He was selected for Canada’s National Junior Team, in the 80’s. He played in Moscow for the world tournament and during the game between Russia and Canada a fight broke out. The Canadian team was kicked out of the tournament because of the fights. Everette said the Russian team was killing them with their sticks and the referees weren’t calling tournaments, and he couldn’t take it anymore. Sanipass went on to play for the Chicago Blackhawks and Quebec Nordiques. Chad Denny was drafted by the Atlanta Thrashers and then to the Chicago Wolves, and won the American League Hockey Championship. Ashton Bernard was drafted and played with the New Jersey Devils.

I played for a while, but I wasn’t very good. I did play Old Timer’s Hockey for a little while. I was more on the management side.

If a youth wanted advice on how to get involved in sports or become athletic, what would you say?

The one thing our athletes never do is train their bodies. They expect when the day arrives or tournament, to put on skates or hockey gear and just play the game, they can’t.

Joe is a lawyer by profession, and in 1969 he was the co-founder of the Union of Nova Scotia Indians. Joe spent over ten years as an associate professor at Cape Breton University, teaching Mi’kmaq studies. In 1998, he also played a key role in the formation of the Mi’kmaq College Institute at CBU. Joe B. has led initiatives throughout his lifetime, always working toward the betterment of his community and Mi’kmaq people in general. In February 2015 Joe B. Marshall was inducted into the Order of Canada. 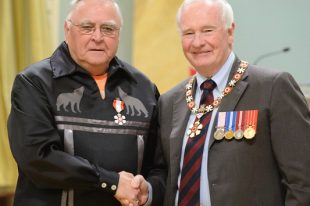